The staff slammed out the work earlier in the week regarding the renovation of #3 white/blue tee. It was laser-leveled by Schaefer-Meyer company on Monday and the staff laid the sod on Tuesday. We narrowed the front of the tee and pointed it properly toward the fairway instead of down the right woods and fence line. I would think it will be ready for play within 3 to 4 weeks.

We also repaired the damage in front of 1 approach and 2 approach on Wednesday before the rain hit that evening. We still have some weakness in a couple of other spots that might take some replacement. We have some extra sod in the parking lot waiting to be laid as necessary when things dry out.

Weakness in Some Fairways and Approaches

We've greened up nicely is many areas of our fairways but we do have some noticeable weakness in heavier trafficked areas such as approaches, shaded areas, north facing areas etc. There are a number of things that could be attributed to causing these issues. We talk mostly about the good and the work that takes place, every once in a while I have to talk about some bad.

I made the fall application like we normally do with our Bermuda reduction material. We were pretty dry in the fall which the Zoysia was under a bit more stress than normal. Of course going dormant, is a bit stressful as well. We normally come out of winter a bit more delayed than normal because of this spary material. The zoysia is tolerant to it but it can tinge it a little.

With the milder than normal temperatures this winter, our warm season turf staying in dormancy for our RoundUp application in February was a bit of concern. We do spray at the near lightest rate which is effective at killing the poa annua and not damaging the zoysia. The areas most effected, high traffic areas like approaches are a little thinner in dormant turf cover and more chemical material could have gotten down into the canopy and affected live tissue. We have pulled a couple of plugs and placed them in the greenhouse to see if they will green up in the next 10-14 days. If they do, we will be fine. If not, we might have to replace the approach area on a couple of holes.

The issue we are facing could have also been the 15-17 degree low temperature we had a few weeks ago when the plants were just greening up and were very susceptible to freeze damage.

Or it could have been a perfect combination of the 3 things happening all at the same time, weaker zoysia from the fall, just a bit more green up than normal in February and the cold temperatures after the early breakout of temperatures.

We will have a better feel about what is happening over the next couple of weeks. I think a majority of the spots will be fine. One thing I'm probably sure of is the Bermuda got its butt kicked as well.

Greens aeration was completed in 2 days by the guys. Looks good overall. Last major aeration work of the season besides monthly needle tining and maybe a hydrojet application in mid-summer.

Renovation begins on #3 Tee today with the removal of 3 trees. Our intentions are to replace the cool season Heinz 57 turf with Zoysia that requires a great deal less maintenance and moisture. It's does need more sun which is the reason for the removal of 3 Elm trees and a Solver Maple.
We then have to strip the sod off the surface, dig out the tree roots that have disrupted the surface, contract tilling and lazer leveling of the surface and laying the sod. Our hope is to have the Tee ready for play in 45 days or less. 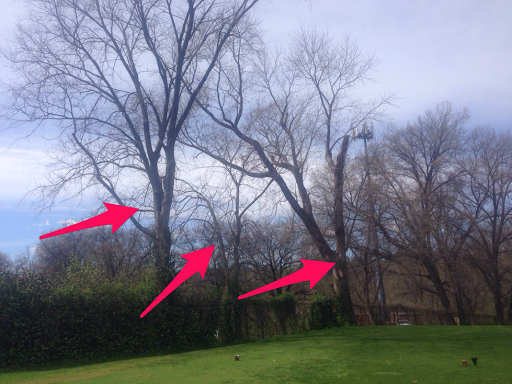 Posted by Glen Echo Country Club Grounds at 8:11 AM No comments:

Spring Color in the Ornamental Pots

Horticulturist Becky was busy this past week planting the numerous pots around the facility. 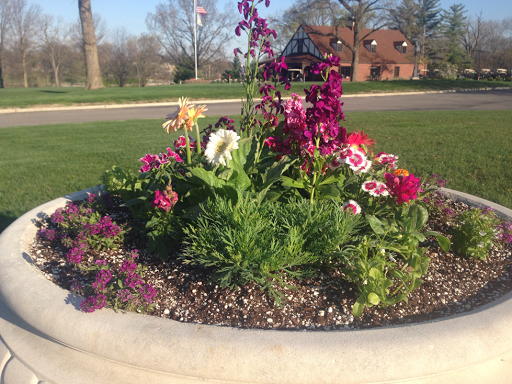 Varieties in the large pot on The Pearson Plaza and other areas include Gerbera, Dianthus, Lobelia,Snapdragons, Agyrathemum, Stock, Margurite Daisy, Osteospermum, and Kale.
Posted by Glen Echo Country Club Grounds at 4:35 PM No comments:

Not much explanation here. Consideration for others maybe?

The Zoysia fairways are greening up early this season. Our fairways at Glen Echo have a tendency to be a bit behind because of our Bermuda Eradication work we are doing with late Summer early Fall herbicide applications. I think most will agree we will take being a little bit behind in trade for the great shape they have been in mid-summer until the end of the season the last few years. First video of the year about our Eradication program describing the area  on the north side of the main road of #8.