Thank You To Food and Beverage Manager Reid

I just wanted to take a moment to recognize long time employee Reid Warren who is leaving Glen Echo to go back home to his roots in Nebraska. Reid is truly one special human being. Kind, gentle, soft spoken and a truly hard working member of our team at Glen Echo. Beth and I have had the privilege of attending many functions at Glen Echo and we have seen first hand his hard work and dedication to this club, its members and guests.

We have also attended many wine dinners during our time at Glen Echo and Reid has been the main presenter at all of these dinners. He has shared a rich knowledge of wine and made every effort to make these evenings a special event.

When he became food and beverage manager a few years ago, I think there were many days and nights that he might have spent more time on the floor waiting tables and helping staff then he did when he solely waited tables. He had to pull himself off the floor and move to his desk to do the business side of  his job which took a great deal of time as well. I think if you asked him, he enjoyed the service and serving part of his job more than anything.

Reid was a regular player on the course when we did not have Monday outings. He would tool around the course many times on his own and sometimes would hook up with other staff members when they arrived. He really enjoyed the game and your course.

Reid was also given the unenviable task of having to control Lady from time to time. Some folks just might not understand a dog coming and sitting at their table waiting for a handout. He was my point guy at the clubhouse to ask if he had seen her. Yeah, I had to let her out a few minutes ago. It was hard to keep a girl away from a party. I appreciate your patience in dealing with her, if she found one door closed, she would always look for another one that was open.

Beth and I were so excited to come to his party that we came a week early. That's for another time.
But anyway, his party is Friday, April 29th, you should be attending!!

We've had the pleasure of seeing his wife Rhonda at various functions at the club and privately away from Glen Echo. A great lady in her own right.

Good luck to you, Rhonda and kids on your next adventure Reid. It's been a pleasure working with you. We will miss you here at Glen Echo CC.
Posted by Glen Echo Country Club Grounds at 9:08 PM No comments:

The past couple of days, the staff have worked on replacing the intermediate along #10 Fairway. We are replacing a little more than 1/2 of it due to Bermuda contamination. We have some spots along the right side that we cut the old sod off but did not have time to remove the old sod and place the new sod. We should have this area completed by next week since conditions are wet and we have an outing for more than 1/2 the day on Friday.

We will circle these areas as ground under repair. We will also circle the new areas and ask that you take a drop from these areas. We have a number of other areas on fairways and intermediate on a number of other holes on the course over the next few weeks as conditions and work schedules allow. #10 will take about 800 yards of sod. A box blade on a tractor and the loader would be more efficient and would help quicken the pace of work but would also create excessive damage because of the weight.

We sprayed these areas with not only our Bermuda Eradication spray but also Round Up last fall in an effort to knock the Bermuda down a bit more. A cold winter would have helped us even more but to no avail.

Most of the area can be driven across with carts without any issue. We used mostly big roll sod which can stand up to more wear and tear. We have a little softer conditions at the circle around the start of the fairway. We will rope off this area and place cut thru areas for walkers. Please follow any signs or ropes to assist us with growing the turf.

Rejuvinated Ornamental Bed Next to Clubhouse Almost Ready For Plants

First, quick announcement. Annual plant sale will be on Saturday May 7th from  9-11 at the maintenance building. We won't have every plant available for sale that is in the greenhouse now but we will have a nice cross section of plants available. Your plants can be charged in the usual manner as you do your other purchases at the club.

Its taken us a couple of weeks to get the bubble bed near ready for planting for Becky but we are close. I like to have slightly raised beds for the following reasons; It provides for better drainage and helps to separate the bed from the surrounding turf area. Our process included the following

Let Me Introduce You To Mr. Ball Mark

Please allow me a moment to introduce you to Mr. Ball Mark. Mr Mark shows up regularly on golf greens all over the world. Many times he is repaired and allowed to heal properly. Other times he is not repaired and will take weeks and maybe months to heal completely. Please take a moment and watch his debut video on the Glen Echo CC Blog!

Posted by Glen Echo Country Club Grounds at 9:30 AM No comments:

I made the first spray of the spring season to our fairways as a part of our Bermuda Eradication Program. I would expect at least one more spray in the next 30 days or so and than a little break in the program allowing the sodded areas and some pretty significant golf events to get completed and we will then spray probably 2-3 more apps in late summer/early fall.

I would expect the Zoysia to turn slightly off color for about 10-14 days. My hope is that we've timed it properly to knock down some Bermuda significantly but to also reduce the amount of seed heads we will have from our Zoysia. If we are able to reduce the seed heads this will allow the zoysia to save energy that it would have used in producing seed. Lets keep our fingers crossed. I posted a video below regarding this program. Miss you girl.

Posted by Glen Echo Country Club Grounds at 10:43 AM No comments:

The Passing of Lady

Beth and I had to send Lady off to the open fields of heaven today. She had become increasingly weaker from her cancer growth and was showing signs of pain. She lived a wonderful life and provided great memories for me and my family and for her golfing friends at three different facilities. I am grateful to all those facilities, the staffs and golfers who showed her much love and understanding, even when she pulled a hot dog off the seat of their cart. Lord, do I have stories.

I have put together a tribute to my beautiful girl and friend.

Email ThisBlogThis!Share to TwitterShare to FacebookShare to Pinterest
Labels: Lady

The short range grass tee is now open. Long range tee will be another week or so. Short range tee is built on sand which allows it to warm quicker and begin growing and repairing itself a little faster. Long range also sits in a hole and its definitely colder down here but it is looking good.

The staff repaired the water line for the water fountain on #14 yesterday. The leak was directly in the middle of the cart path. They cut the asphalt out and were able to locate the leak about 15" underground and made the repairs pretty quickly.

Article Regarding Pesticides We Come In Contact With Regularly

Interesting article in Forbes Magazine about pesticides we come in contact with in our daily lives. Click link below.

Another example of our Fairway Bermuda Eradication work on #12. View below is from Spring 2015 where we had sprayed the Bermuda the fall before with our product. The last photo shows how well the Zoysia has filled in and how the Bermuda has been slowed allowing these improvements. We will still need to spray these areas further to help suppress the Bermuda even more but the program is working well in many areas on the golf course. 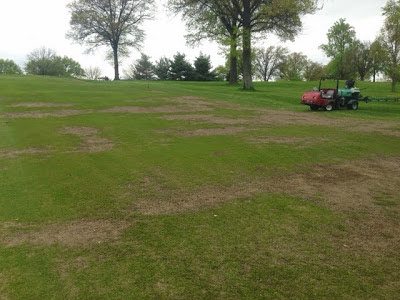 Posted by Glen Echo Country Club Grounds at 10:22 AM No comments:

A number of items to cover as we go into this weekend. The weather has been really kind to us with average temperatures 6-7 degrees above normal for March. That means our warm season grass has awakened early this year. Normally we mow fairways around the 20th of April give or a take a few days. Might be a little early this year but will evaluate a little further early next week. No promises but we are looking at it closely. 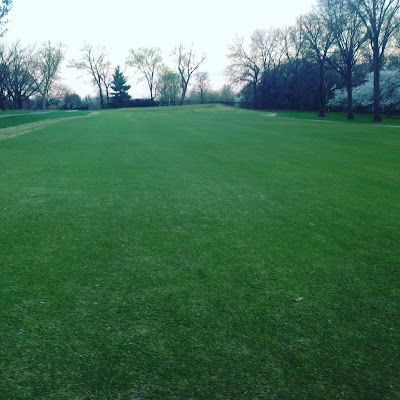 The staff noticed the other day a water stream above the 14th tee water fountain. Skip has investigated and believes the leak is coming from under the cart path. Sure, lets make it real difficult. We plan to cut the cart path next week and dig up the leak. The line feeds the water fountain on 14 so it is shutoff for now. Sorry for the inconvenience.