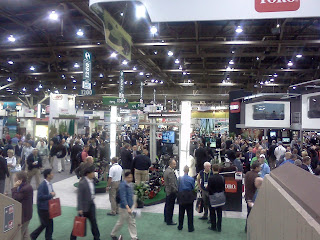 Spending the next day and some going through well over 250,000 square feet of tradeshow space. Looking for the next great product in turf management to maintain Glen Echo CC. 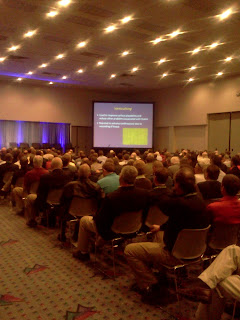 I am attending the national superintendent conference this week in Las Vegas. A quick trip since we have so much activity taking place at the club. Arrived Monday evening and will be leaving at noon on Thursday.

Picture below is a session on BMP in dealing with anthracnose which is a disease we get on our poa that contaminates our greens. 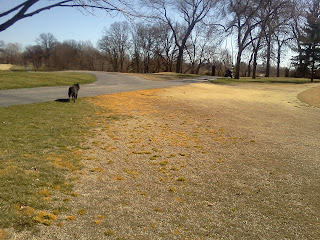 With the warmer temps, the dormant app of RoundUp is moving through the poa plants of the fairways and tees. The material was applied about 4-5 weeks ago. The picture below is from the area near #2 green and its surround.
Joe Wachter
Sent from my LG phone
Posted by Glen Echo Country Club Grounds at 1:26 PM No comments:

The contractor(Wagner Construction) who is doing the work for Metro is completing their responsibilities for the project.  One of the requirements was to move the mounds to the right of #1 fairway per our recommendation from our Master Plan.  A majority of that work was accomplished today.  I asked the contractor to leave a portion of the mound so we can use that soil to tie our existing fairway into the planned widening of the fairway.  We have two catch basins and drainage swales to put in place plus the drainage which well reduce the overall moisture that will remain in this low area of the golf course.  We are waiting on our sod provider to give us the okay that they can cut sod before we begin this work   Some of our work will require sod to be removed from the fairway and we do not want to do further disruption to the area until sod can be cut.

The road leading to the area will be sodded as well.  The contractor will also be doing some asphalt repair in our maintenance area and from the rear gate to the top of the hill near the short range parking area.  A tentative schedule for this work is planned for the week of March 5-7.  We will keep you informed of potential changes in gate opening and closing as we get closer to the date.

Posted by Glen Echo Country Club Grounds at 11:59 AM No comments: 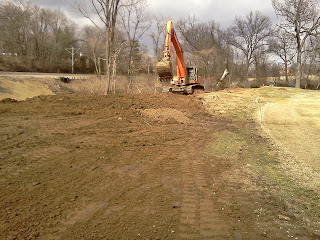 Work continues to progress on the Pierson Memorial.  The walls were poured yesterday on the fountain pool and the forms were removed today.  Forms for the inner circle curbing were put in place today and one section of curbing was poured.  The remaining inner circle should be formed up on Friday and the curbing will be poured.

Asphalt curbing in front of the living room and around the corner to the scoreboard will be removed and replaced with concrete by Glen Echo to repair damaged curb and give us a consistent look in the area of the clubhouse.  We will also be replacing curbing along the practice green and #18 which was lost last season because of the overlay that was placed on the damaged asphalt along this area.  Without the curbing, water runs directly from the roadway across #18 and #1 fairway leaving these areas wet for a longer period time.  The new curbing will direct water into the storm sewer.

Our staff has been busy today digging drainage lines from the Olympic room area, across the new plaza area which will then connect all front gutters and will also drain the fountain pool.  This area will be back filled on Friday.

Soil is being removed from the fountain and plaza walkway areas in preparation of the forms being put in place by next week.  Four inches of rock and four inches of concrete will be put in this area.

Our contractor came in yesterday and ground 15 stumps that were in need of being ground.  Over the next couple of weeks we will be picking up the remnants of this material, in some cases we will need to add additional soil and then they will be sodded.

The concrete was poured for the Olympic Room entrance and walkways on Monday.  The walkway handrails are being measured today so they can be fabricated and will be installed in the next few weeks.  The concrete will have saw cuts placed in them tomorrow for design purposes.  It will then be washed and sealed by Thursday.  Access to these paths will not be allowed until next week.

The fountain walls and pedestal for the water and fire feature will poured on Wednesday.

Our concrete contractor will be working on curbing next week and will be doing some grading around the fountain area in preparation for the forms to be set in place.  The plaza walkways should be under construction by the week of March 5th.  Our staff has some demolition work involving removing asphalt and digging out the sub grade in the area of the truck unloading area and on both sides of the portico.  Drainage pipes for the Olympic Room entrance area, driveways and new drainage for the gutter downspouts will all be connected to a main feeder line that will run across the front yard area.  This will all be tied into the storm sewer that runs across #18 and #1 to the creek.

Our staff will be involved in getting the soil put back in place for the beds to be planted in the Olympic Room area and in front of the main dining room and living room.  These areas will also be put back to grade for our lighting installer to get the walkways and up lighting installed to the building.

There is another live cam of eagles on a nest: Decorah, Iowa Eagle Cam
I pulled it up this morning and saw the parents changing spots on the eggs which was interesting to see.  This site also has sound with its camera.  As I was typing this blog, the eagle on the nest started calling.  It flew off the nest and about 5 seconds later the other eagle flew into the nest.  It took the second eagle at least two minutes to get back on the nest.
Posted by Glen Echo Country Club Grounds at 1:19 PM No comments:

The box culvert along #1 has been completed covered with soil and rough graded by a dozer.  The old ditch area has been filled with over 10' of box culvert and soil which has drastically raised the level of the area between the metrolink and mounds along #1.  We hope to move the soil from the old mounds in the next couple of weeks.  This soil will be pushed toward the fence line and will be rising slightly to the fence to assist balls in staying in play.  This will also force the water to the catch basins and we will then pipe the water to the ditch.  The fairway will moved approximately 5 yards to the right and will be sodded with zoysia. The remaining area damaged from the construction will be sodded with fescue.

First concrete being poured for the Marvin Pierson Memorial Plaza

Great progress has been made this week.  The first concrete for the project was poured today for the foundation and floor of the fountain.  Approximately 22 yards of concrete were used.  Monday the forms will be put in place for the fountain walls and we expect to have them poured on Tuesday.

Bald Eagle on the nest

The Bald Eagle Cam from Harrison Bay has the eagle on the nest with two eggs laid.  A great closeup!

In my last post regarding the Marvin Pierson Plaza work, I mentioned that the Olympic Room entrance could be open tentatively by February 18th.  I looked at the calendar incorrectly and the date should have been posted as February 25th.  With the snow on Monday evening and rain predicted for Wednesday, the date of the 25th could be pushed back slightly.  I will make a post late in the week as work begins again after a couple of days of weather delays.
Posted by Glen Echo Country Club Grounds at 7:26 AM No comments:

Work is in full swing on the Marvin Pierson Memorial Plaza in front of the clubhouse.  Our staff along with Oreo & Botta Concrete Company are beginning to put into place the walkways near the Olympic Room entrance.  The area has been formed, rock and wire mesh laid in place and the area will be blanketed to keep the freeze from entering the ground over the next few days.  The plan is to pour the concrete late next week.  Tentatively, the Olympic Room/Members entrance should be open by February 18th.