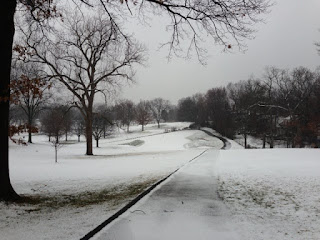 (Editors note, member had sent me picture of wood loaded that morning which I had forgotten.  Sorry for the inconvenience.)
About 3-4 weeks ago on a Saturday, a red Escalade pulling a trailer with a few rows of firewood and I believe a gray Audi left the grounds with firewood.  I was out on the course and saw the vehicles leaving the property through the back gate.  I've waited a few weeks to be contacted and have not heard from anyone regarding the firewood.  I would like to bill the individual for the wood but do not know who was in the vehicles.  Please contact me through email or call me so I can bill you for the wood.

Email ThisBlogThis!Share to TwitterShare to FacebookShare to Pinterest
Labels: Trees 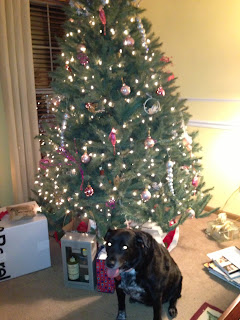 Sent from my iPhone
Joe WachterMerry Christmas from Lady Bug and the grounds staff.
Posted by Glen Echo Country Club Grounds at 8:41 PM No comments: 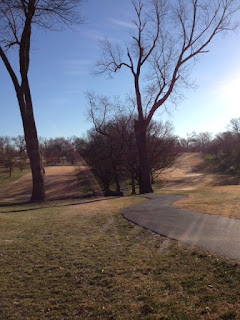 Sent from my iPhone
Joe WachterThe course had a couple of issues with the high winds from Thursday. An arm snapped off a silver maple that was near the left corner of #3 red tee. The tree on the left is next to 12 green. We also lost a smaller evergreen that was going to be removed this winter because it was thinning severely. We will be spending a lot of time picking up brush/twigs that fell as well over the next couple of weeks with the holidays and vacations tied together.
Posted by Glen Echo Country Club Grounds at 9:13 AM No comments:

Leaf clean up along fences

As the leaves drop each fall, we spend  a great deal of time and energy either picking them up with our  sweeper or blowing them in windrows.  Our large area mowers then proceed to mulch them back to the soil.   Sometimes the prevailing winds and or our blowing machines move them up against the fence lines that mark the edge of our course creating places for errant or in my case perfectly lined up golf balls to come to rest.  We attempt to run our mulching mowers up against the fence but in the end, we must use backpack blowers to move the leaves away from the fence for removal.  The staff spent most of the day today cleaning up along a few different fences including #2 and #3 and possibly on to #4. The excess leaves also do kill grass up to 3-4' away from the fence which creates difficult lies if your ball ends up in this area.  Also, the leaves can blow back out into main play areas creating additional difficulty in locating golf balls.

So your club want's a national championship

Check out the article below regarding the U.S. Open at Merion GC for the 2013 and the sacrifice members are making to provide for perfect conditions.

The staff spent Monday blowing out the system in preparation for winter.  This normally takes place by the first week of December but was delayed because of the mild weather and the new sod that had been laid in late fall for the bunker project.  Adequate amounts of rain over the last couple of weeks and the potential for some colder weather signaled it was time to shutdown the system.  We rent a large air compressor that hooks into the irrigation system and forces a volume(900 cubic feet per minute) of air through the system while the staff turns on the sprinkler heads and allows the water to evacuate from the system until air blows out of the head.  The staff are able to turn on 10-12 heads throughout the property at a time for this process.


Posted by Glen Echo Country Club Grounds at 8:53 AM No comments:

Blog on vacation Firewood for sale

The blog will be on vacation for the next week. Upcoming work includes some additional leaf cleanup, removing damaged collars and replacing with good bentgrass, cleanup around new bunker areas, removal of small bentgrass approach on #2 and converting to zoysia and fertilization of all the cool season rough.

Reminder, firewood is being sold to membership for self service p/u or delivery. Please alert me if you are picking up wood so I can charge your account. $50 for p/u load. Reduced charge for smaller loads. Delivery will be an upcharge based on distance.

Posted by Glen Echo Country Club Grounds at 10:41 AM No comments:

Our bunker renovations of #17 required some additional bentgrass to replace some of the collar that was removed during the construction.  Both our collar and greens nursery have soil structure issues that can grow bentgrass adequately but when transferred to an green on the course, it normally fails.  Over the last couple of years, we have begun the process to remove the false bent grass fronts on the greens.  An explanation of my reasoning regarding this removal is listed below.

The green committee evaluated a recommendation made by Kye Goalby before the bunker project that included the removal of a few trees near #2 green and providing an expanded approach/fairway and green side fairway area.  The committee agreed with the recommendation and during our bunker tree removal, we removed the trees on #2.  To insure we had adequate money for the bunker project, we delayed the work until after the project was completed.  The committee gave us the go ahead on Tuesday and we began stripping away the sod.  A majority of the sod was laid on Thursday and we will finish this area today.

Posted by Glen Echo Country Club Grounds at 8:03 AM 1 comment:

With beautiful weather scheduled the next few days, I making an offer you can't refuse.  Carts will be allowed off the paths for Friday November 30th, Saturday December 1st, and Sunday December 2nd.  Come one, come all, bring a guest or two and enjoy some food and drinks in the clubhouse afterward as well as some college championship games!!.
Posted by Glen Echo Country Club Grounds at 2:02 PM No comments:

CARTS WILL BE OFF THE PATHS

for the Turkey Day Scramble so come out, buzz around the course and enjoy a beverage or two after the round in McGrew's Pub!
Posted by Glen Echo Country Club Grounds at 7:59 AM No comments: 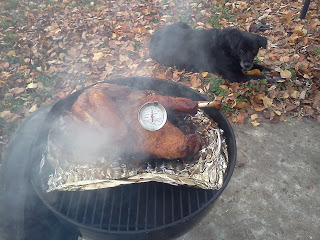 Happy Thanksgiving. Thanks for all you do for us!!

Posted by Glen Echo Country Club Grounds at 11:59 AM No comments:

The staff finished the practice bunker on Tuesday which is the last bunker in our overall project.  We had 45 bunkers when we started last season and now have 37 bunkers to maintain.

The project has come in at or near our budget.  There were a few surprises along the way but most everything went as planned.  The staff faced some pretty difficult circumstances with the rain we experienced in the first half of the project but some dry weather over the last half allowed us to get the project completed fairly close to schedule.

Plans for the next couple weeks include:


Posted by Glen Echo Country Club Grounds at 7:25 AM No comments:

With great anticipation and excitement, our bunker project began on September 17th.

At the end of the day today, I am relieved and very happy to announce that we have completed the bunkers on the golf course!!

At this time, the following bunkers have been opened for play.  Bunkers that are open for play have no ropes around them.  As the sod continues to mature, we will open additional bunkers to play.

Last Bunker On Course Being Prepped 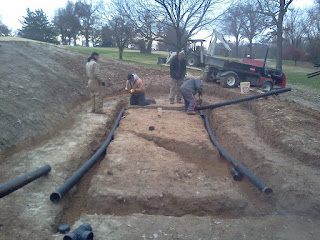 The last bunker on the course is being completed hopefully by the end of today if the rain stays away. We still have the practice to finish and some cleanup on various holes.
Joe Wachter
Sent from my LG phone
Posted by Glen Echo Country Club Grounds at 8:36 AM No comments:

The staff was able to get the three bunkers on #17 nearly completed on Friday.  We still have the outflow trenches to back fill and packed and we have some sodding to do on the right bunker.  We also have some bentgrass collar that needs to be replaced.

We will be cleaning out #1 bunker on Monday, install drainage, sand and sod which will complete the golf course portion of the project.  We still have work to do on practice range and will take care of that as soon as possible.  We will be spending the next couple of weeks checking and cleaning up our work areas, back back fill settled trenches, trimming sod, watering, mowing and other work to get the bunkers and course ready for winter. 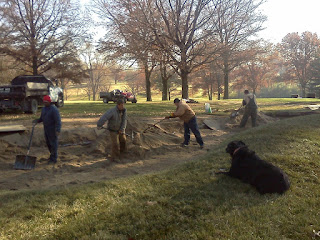 Lady showed up today making sure the guys get #17 fnished as planned.  Staff spreading sand this morning.
Joe Wachter
Sent from my LG phone
Posted by Glen Echo Country Club Grounds at 9:45 AM No comments:

Another frosty morning greeted the staff which delayed our work on the bunker project for an hour or so this morning but the staff had a busy day on #17 bunkers once the frost lifted.  The left bunker was cleaned up and drainage installed.  Sodding was completed around the left side bunkers and we expect to get the sand spread on Friday.  We still need to clean up the right bunker on #17, install drainage and plan to complete it on Friday as well. Hopefully, all three bunkers will be completed on #17 by the end of the day tomorrow.  This will leave us with one bunker on #1 and the practice bunker.

We received well over 1" of rain Sunday evening which was needed.  Some of our sod was getting pretty dry from the winds of the last few days.  We were able to do some outflow trenching to finish the right bunker of #5, #17 bunkers had the outflow trenched as was #1.  Today, the staff  will put in a full day on the bunker project.  The outflow pipe was laid and back filled on the right bunker of #5, sod work was finished around the back right of the right side #5 bunker, and some sod was added to the left bunker of #6.  Drainage was placed in the front bunker of #17.  We plan to spread the sand in the front bunker on Thursday and hopefully get it sodded.  I would expect that we will complete the left side bunker of #17 on Friday.

I know I'm a day late for this but wanted to thank our members, families and friends who have served or are currently serving in the military.  We appreciate the sacrifices you made for our country.  Happy Birthday to the Marines which was Saturday as well! 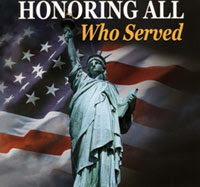 Posted by Glen Echo Country Club Grounds at 9:31 AM No comments:

We were finally able to get #4 right side bunker completed on Friday.  Its been a long time since we started #4, 27 days since we had finished the left bunker.  Yes, change did finally come!

The staff completed both left bunkers on #4 on Friday and we trenched the remaining four bunkers left on the course, 3 on #17 and the last one on #1.  The staff cleaned out most of the soil from the bunkers on #17 in preparation for placing drainage in them early next week and the potential rain coming Sunday/Monday.

I hope we can finish the bunkers on #17 this coming week and all we will have left is #1 and the practice for Thanksgiving week.

Posted by Glen Echo Country Club Grounds at 6:49 AM No comments: